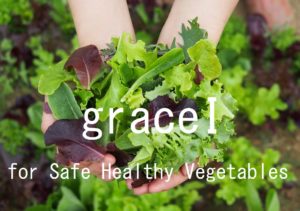 ”grace I” is an amino acid fermented soil improvement material produced by the action of photosynthetic bacteria and other microorganisms using high-quality organic materials.
This site explains how ”grace I” helps safe vegetables grow along with the mechanism of growing vegetables and the issues of modern farming.

Vegetables absorbs nitrogen as nutrient from roots
As all you know, vegetables absorb nutrients from their roots, and the most important in these nutrients is nitrogen.
Nitrogen is absorbed from the roots of vegetables after the organic matter and fertilizer in the soil are decomposed into nitrate nitrogen by soil microorganisms.

Use of pesticides
Since vegetable cultivation emphasizes quality improvement and good appearance, pesticides are used to control pests and weeds. The use of pesticide has reduced the number of microorganisms that break down organic matter in the soil.

3．grace I for safe vegetable cultivation

grace I is a soil improvement material that contains nutrients produced by decomposing photosynthetic bacteria and high-quality organic matter by the action of other microorganisms.

Vegetables grow faster because they absorb amino acids directly and do not need to photosynthesize nitrate nitrogen to convert them into amino acids.

Can grow in some lack of sunshine.

Due to unseasonable weather in recent years, lack of sunshine may continue,
but vegetables can grow with grace I even if there is insufficient sunlight.

Diversity of microorganisms in soil

grace I also contains a variety of microorganisms to break down the organic matter in the raw materials.
This microbial can preserve the microbial diversity of the soil brew.

The Way of using grace I is Details